The churel may sound like a delicious (hopefully cinnamon-flavoured) pastry, or perhaps some colourful bird of paradise, but we can assure you it is not. Churels are the vengeful spirits of women who return to earth in order to drain the blood, virility, and even the semen of male victims, transforming them from sperm-filled youths to dusty old men. They go by numerous alternate names, including the churail, chudail, jakhin, mukai, and nagulai, and originate from South Asian folklore, enjoying enduring popularity throughout North India, Bangladesh, and Pakistan.

They will typically target their own relatives, specifically male members of their family, and will usually attack them in order from youngest to oldest, or from most-loved to least-loved. So, for once, being a young, attractive, well-liked man is not a good thing. Go figure. They are commonly found in places associated with death and filth, such as graveyards, abandoned battlefields, crossroads, toilets, and the male changing rooms of any gym. Once they have sated their blood-lust with their own family members, they can often be found trawling the darkened highways, seducing lone travelling men to accompany them before sucking them dry. Innuendo totally intended.

In some legends, the churel will keep the young man captive until he grows too old, or repeatedly boinks him until he withers, dies, and joins the spirit in her sexy vengeance (essentially death by snoo-snoo). In other accounts, if a young man is seduced by a churel and simply eats food she has offered to him, he will return to his village at dawn an elderly man. Basically if you get attacked by a churel you have two options: death by a crushed pelvis or instant retirement. In Hindu folklore, churels may transform into dakinis, horrifying god-like creatures that serve the goddess Kali and join her in feasting on human flesh and blood. Because, after subsisting off a diet made up almost entirely of sperm for however long, human flesh probably starts to look quite appealing.

According to most legends, there are three different types of churel: soshi churels, poshi churels, and toshi churels. Soshi, Poshi, and Toshi may sound like members of the Spice Girls but don’t let that fool you, these are hideous, blood-sucking monsters we’re talking about. Oh wait.

The Soshi Churels are the most common and return to seek vengeance on their family for having neglected or abused them in life, focusing entirely on draining the lifeblood of all their male family members. They sometimes wait besides fields and call out to their relatives as they return home from work. If you answer the churel’s call, she will haunt you until your eventual death, but ignore her and she’ll…well…just keep shouting at you. Maybe just buy a pair of earplugs?

The Poshi Churels were women who had no real sexual desire in life and so focus their sexual deviancy and bloodlust on children. They can only be brought to heel by the man they once loved in life, to whom they are still subservient. The Toshi Churels are the rarest of all and represent women who were closely bonded with their husbands. They will return to their capacity as dutiful wives and, in a bizarre twist, serve only to protect their family.

The churel is often depicted as a grotesque and emaciated creature, with long sagging breasts, unkempt hair, a pot belly, and claw-like hands. They sometimes roam around completely naked with their matted pubic hair visibly exposed, kind of like Courtney Love on an average Saturday night.

They have unnaturally long, thick black tongues surrounded by broad, rough lips, although in some accounts they are said to have no mouth at all. In rare cases, they are reported to have pig-like faces with large fangs or human faces with sharp tusks. Yet the most common and unique feature of the churels are their feet, which face the wrong way round with the heel at the front and the toes at the back.

In this form their sex appeal is doubtful at best, so they conveniently transform into beautiful young women in order to seduce their prey. In this guise, they carry a lantern, partially cover their face, and usually wear a long red or white sari that covers their legs. Although in this state they appear almost exactly like a human woman, their feet are still pointed backwards and so they take great pains to hide them. Once they have ensnared a lusty lothario, they will reveal their true form and engage in the freakiest, nastiest sex you could possibly imagine.

When a woman dies either during childbirth, while pregnant, or while menstruating, there is a strong possibility that she will become a churel. Normally she will rise from the grave because she wants vengeance for her deceased child, because her family treated her badly in life or because they did not care for her properly during her pregnancy. So, when in India, be really nice to pregnant women or risk facing death by semen extraction.

When a pregnant woman dies during the five-day Hindu festival of Diwali, it is believed she will come back as a particularly powerful churel, while in Western India they believe that any woman who died an unnatural death will become a churel. Originally it was believed that only low-caste women could turn into churels, although it seems bloodthirsty revenge is a dish best served to people of any class background. In short, all churels are created equal, and are all equally as terrible.

The only way to completely avoid a churel is to prevent her creation in the first place, so extra special care must be taken when dealing with pregnant women. Should they, through some awful circumstance, die anyway, there are a handful of things the family can do to hopefully prevent their return and thus protect their precious nads. Forgoing the Hindu tradition of cremation, a potential churel should be buried face down. Songs and prayers in remembrance of her should be sung at her funeral, while all rites and rituals must be performed with the utmost care.

During the funerary procession, the corpse should be carried out of the house through a side door rather than the front door, so that hopefully the churel does not find her way back into the house. Because, after all, it’s not like she lived there for an extended period of time and probably knows the layout of the house or anything. Sometimes family members will sprinkle mustard or millet seeds around the grave and even the whole village, because it is believed that the churel must count every single seed before returning home. This isn’t a sure-fire way to stop her, but it’ll certainly slow her down and make that second mortgage you took out on your house to buy mustard seeds worthwhile. 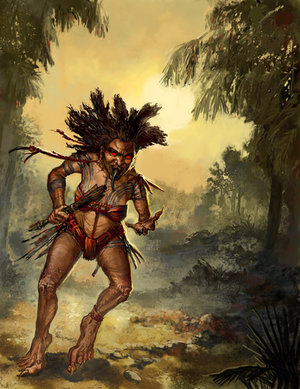 In order to tie the churel to the burial site, four nails are normally fixed to the four corners of the grave and red flowers are planted upon it. In extreme cases, the corpse may even be bound so that the churel’s movement is restricted when they finally rise from the grave. In Punjab, they take this restriction to a whole new level by nailing the hands and feet of the corpse to the coffin, shackling its feet in chains, and smearing red pepper in its eyes to hopefully blind the waking churel. In some cases, they will even break the deceased’s legs, chain the big toes together, or turn the feet backwards.

Hindu priests are regularly called to perform exorcisms, pray, burn incense, or make offerings to the deceased’s burial site in an attempt to ward the churel off, but this is not a permanent solution. In spite of all these precautions, churels are known to return home months or even years after their death. So if you thought your family get togethers were bad, at least old Auntie Sue isn’t trying to drag you away to her sex dungeon.

Want to support us so that we can continue creating great horror content? Then sign up to our Patreon.